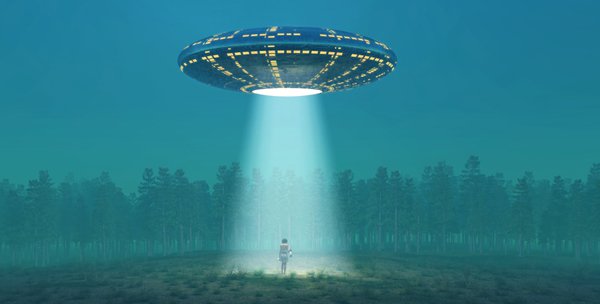 The green alien got out of his space ship, as the ramp-like structure opened. The landing had caused a dust cloud to gather around the spaceship, making visibility difficult. An eerie light was emitted from the spaceship, a slight bluish-green, which didn’t help make the alien’s disfigured, wrinkled face any more beautiful. The light threw his scars and injuries into greater relief, and in that moment, the way he looked actually represented his evil nature, for he was a pawn, a mindless soldier who obeyed every order from his seniors, nothing more than a spy for the alien king.

He had been sent to earth for a single purpose-information. He had to find out everything about earth, and report to his superiors, who reported to their superiors, who reported to the king. The most important things were the atmosphere and how highly prepared the humans were for war. Then, the aliens, according to the given information, would launch a full-scale attack on earth. After this attack, the alien kingdom will be the largest in the entire galaxy, strong enough to defend itself from any rebellion that is likely to erupt in and around the galaxy.

The discovery of speeds faster than light by using materials yet unfound on earth, namely Ununspeedium and Ununsuperspeedium, had powered the making of spaceships and space shuttles that could travel the longest distances in hours, and also through time. After all, humans aren’t the most advanced creatures in the galaxy.

The alien walked onto the land and looked around and wondered, “What is this weird stuff growing from the ground? All brown in the middle and green fuzz growing out of its side, and what about the yellow colored thing hanging from the brown part?”

He said in a raspy voice, as if he had to drink sulfuric acid alongside breakfast, lunch and dinner, “Computer, tell me what this is……” pointing his hand at the (according to him) brown thing with green fuzz and yellow thing hanging.

IT IS A TREE. SPECIFICALLY, Mangifera indica, THE MANGO TREE.

IT IS ONE OF THE THINGS UNIQUE TO EARTH- PLANTS.

GIVES THEM WOOD,OXYGEN AND FRUITS, AND SURVIVES DUE TO PHOTOSYNTHESIS, WHICH INVOLVES THE HUMANS GIVING THE PLANTS CARBON DIOXIDE, SUNLIGHT FROM THE SUN AND WATER+MINERALS.

IT IS ROOTED TO THE EARTH, AND NOT MUCH USE IN BATTLE, AS IT HAS NO HANDS OR FEET.

“Hmm. How is the atmosphere? Toxic?”

“Good. Let us walk around in camouflage for a little while, finding out more about this planet.” Saying so, he pressed a button on his suit and immediately became invisible.

“Computer, camouflage the ship. We don’t want any nosy humans poking around it, do we?”

He walked up a small hill, and briskly made his way down a road, which led to a park where children were playing.

“Pfft. Those are humans? Look at their delicate skin and…… no claws at all! I should probably tell my superiors that there is no need for an attack on this planet….. They’ll probably bow down to us if we threatened them.”

I WOULD RECONSIDER, SIR.

THOSE ARE JUST CHILDREN. SOME OF THE ADULTS HERE ARE ACTUALLY QUITE FIERCE.

I HAVE PREPARED A CARTOGRAPH AND ALSO A LITTLE BIT OF HISTORY OF THE ENTIRE PLANET, AND I WOULD LIKE YOU TO SEE HOW BATTLE-PREPARED THEY HAVE BECOME OVER THE AGES.

A map was shown to the alien on the inside of the faceplate and, as he surveyed it, he said to himself, “nuclear plants……hmm……minefields……tanks…fighter planes…….H-bombs….impressive.” “What is this Hiroshima and Nagasaki?”

“Ahhhh….. Victim cities of a nuclear attack…….Japan, huh…horrifying, truly……but nothing, compared to what we are about to do.”

“Say, where do you get all this information?”

SIR, I HAVE ACCESSED THE WORLD WIDE WEB.

THERE IS THIS SPACE-AGE TECHNOLOGY INVENTED BY HUMANS…… THEY CALL IT THE INTERNET.

“Now, inform my superiors. We will invade earth in an hour.”

After an hour, the aliens entered the atmosphere of earth, in their well camouflaged spaceships, ready for war. The spaceships were equipped with guns and cannons of many kinds, all powered by a kind of nuclear energy source.

The first shot was fired by the spaceship in the lead; probably the commander, and then the other ships formed an attack position and readied themselves to conquer this new land.

Meanwhile, our alien spy had hopped back into his spaceship and had joined the others. All of them fired, and houses, buildings, monuments, places of important historical/geographical value were destroyed; chaos reigned everywhere.

While the statue of liberty was being disintegrated, the sphinx in Egypt was being decapitated; such was the size of the alien army.

People were running around helter skelter, no one to guide them, advise them. Families were being killed by the hundred, with only a few survivors, who were carried into the spaceship, from where horrifying, blood curdling shrieks were heard.

Amongst all this chaos, a magnified voice issued from the lead spaceship:

“YOUR TIME HAS COME. THE MEN, WOMEN AND CHILDREN LEFT, SURRENDER OR SUFFER OUR WRATH!”

“We are aliens to you, from far away; farther than your species can ever travel in this endless expanse that you people call space!”

“We are the largest kingdom in the entire galaxy, and many galaxies beyond!”

Then, the commander noticed something. Humans. Unharmed. He fired at them, yet the bullets got deflected, and the people there kept looking back at them.

He went close to them, only to be obstructed by a transparent screen of protection. He roared, “WHAT SORCERY IS THIS? HOW CAN I NOT ATTACK THEM?”

“My army! Fire at them! Shred this protective shield with your particle disintegrator ray!”

He heard a faint murmur from the other side, so, he got down and pressed his ear against the screen.

“Stop! I hear something! STOP FIRING!”

On the other side, one of the people looked at the person sitting next to him, and said, “Pass the popcorn, dude.”